Mr. Isamu Seki is one of the few traditionally trained butsudan (Buddhist altar/furniture) craftsmen who has extensive experience in making bustudan, temple ornament/equipment, oihai (ancestral tablet), and the repairing of butsuzo (Buddhist sculptures) for over 60 years.

Mr. Seki entered the world of making butsudan altars when he was just 15 years old and had undergone five years of the intensive apprenticeship program by the prestigious Terada Seisakujo in Tokyo.  When he was twenty years old, he gained his independence and established his own butsudan manufacturing and retail company, named Kanhodo, which located in the city of Maebashi, Gunma-ken, Japan.  When he established the new company of Kanhodo, there were not many Tokyo style butsudan stores located in the Gunma-ken area.  Hence, he was the entrepreneur responsible for spreading the special Tokyo style butsudan, all over Gunma-ken and beyond.

In recent years, the modern style butsudan called, “simple butsudan” has become popular in Japan.  Kanhodo has become the leading butsudan enterprise for creating and manufacturing the unique one of a kind “simple butsudan” for new-age customers.  As well he has also received numerous commissions from temples to make and repair the ornate and historical ornaments/equipment used in ceremonies.  During his extended career, he has also mastered the difficult skill of the realistic butsuzo repairing technique and has worked on many butsuzo for both temples and individual household.

Finally, it should be noted that he has extensive experience in making and carving Oihai (ancestral tablets).  You may ask, what is special about Mr. Seki’s Oihai tablets?  Well it is found in the fact, that instead of gold paint, which most of the other Oihai carving companies use, he uses real gold inside the carved letters of the Kaimyo (Buddhist Name) on the tablet.

This has been Mr. Seki’s life-long mission and policy to make the highest quality products for his customers. 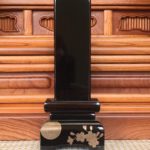